TOP 5 BADASS LESBIAN FLICKS
In a good action movie, there's really nothing better than guns and girls. Especially when the girls are the ones wielding the guns in the bedroom. Thus, I created my top five list of great badass lesbian movies. 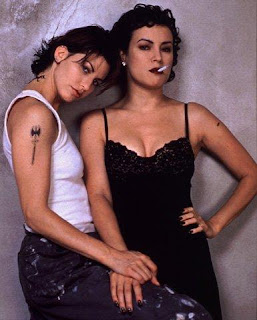 An early movie from the famed Wachowski brothers (The Matrix Trilogy), Bound is definitely the best lesbian thriller out there. Gina Gershon plays Corky, the soft butch plumber who's moved in next door to a mob boss (Joe Pantoliano) and his wife, Violet (Jennifer Tilly). Violet plays a seductive cat-and-mouse game with Corky and draws her into a plot to steal her husband's dirty money and run away. The movie creeps up in a slow but steady pace, building a very atmospheric tension which vibrates as the twisted plot unwinds. Bound is a straight up fantastic thriller in it's own right, definitely unique and daring. While Jennifer Tilly's baby voice occasionally rubs me the wrong way, she worked perfectly in this movie, straddling the line between innocent and dangerous. Not to mention, watching Violet fuck Corky as the other woman bites her finger to stave
off noises is definitely one of the hottest and
more tasteful lesbian sex scenes out there.
2. V For Vendetta (2006)

V for Vendetta is a classic in its own right. Anarchy, an explosion of an England landmark, and an anti-hero who speaks mostly in Vs. There's little better. Yet, because this was a mainstream movie when it came out, I was surprised by the vital bit of lesbianness in it. Evey (Natalie Portman) finds herself trapped in a prison cell and uncovers a long letter written by another inmate. The inmate tells her life story, her struggles with her sexuality, her various lovers, and the way The Man targeted her simply because she loved another woman. The story is humanizing, realistic, and extremely touching. You can watch the full scene on youtube here or below:

Alright. So I have various problems with this movie on a purely cinematic level. Mainly because it feels less like it's own movie and more like an American response to Guy Ritchie, and like many American adaptations, falls short of the real thing. However, this movie also has it's saving graces. One of which being the relationship between Georgia Sykes (Alicia Keys) and Sharice (Taraji P. Henson). They play two badass chicks who together make a killer assassin team (excuse the pun). One of the things I appreciate most about this relationship is how it enunciates a lesbian relationship most of Hollywood is unfamiliar with. They're black, they're "sisters", and one holds an unrequited attraction for the other. This isn't the male-centric women-on-women ideal that seems to have stepped straight out of a porno. They're gritty, complex, and ultimately tragic.
4. Planet Terror (2007)

While Planet Terror is one of my personal all time favorites, it scraps the heels of Smokin' Aces simply for the fact that the lesbian subplot is a minor one. The zombie flick written and directed by Robert Rodriguez is done in the style of a 1970s drive-in grind house film, making it wonderfully gritty and campy. The stunningly period Marley Shelton plays Dr. Dakota Block, a closet lesbian married to the unstable and possessive Dr. Block (Josh Brolin). She attempts to run away from him with her lover, played by Fergie (also known as Boobsy McBoobs), but her plans are thwarted thanks to the zombie apocalypse. Unfortunately, there isn't a single scene between Dr. Dakota Block and her lover, however, there is some serious chemistry between the doctor and Rose Mcgowan's character. Also, as a sidenote, there is also the "Crazy Babysitter Twins" who have an ambiguous sexually. I think they're just Axe-sexual.
5. Mulholland Drive (2001)
This one I feel kind of obligated to throw in there. I'm not quite sure what you'd classify this movie as. Thriller, drama, whatthefuckcrazy. Either way, this David Lynch classic is often one of the first movies that seems to come to mind when people scout for lesbian movies. To be perfectly honest, I didn't quite get the draw. But I definitely have to give this movie another chance, seeing as I've only seen it once and I think it's one of those things you definitely have to be in a patient mood for. Nonetheless, give me a little intimacy between Naomi Watts and Laura Harring and I'm really not complaining.


Finally, three movies that deserve an honorary mention. D.E.B.S., a campy lesbian spy movie, I've been told is amazing, though I have to confess to never have seeing it. Definitely putting that one up on my netflixs. Henry & June I feel deserves a mention for multiple reasons, even though it isn't exactly an action movie; possible thriller at very best, but even that is a stretch. It's the story of Anais Nin, the erotica writer of the early 1900s, and her twisted marriage. However, it has Uma Thurman and Maria de Mediros (Butch's girlfriend from Pulp Fiction) acting as lesbian lovers and features one of the sexiest scenes to burn the theatre screen. To push the point, it was the first film to replace the X rating with the NC-17 rating. And did I mention Uma Thurman has lesbian sex? Okay. Calming down. Finally, Black Swan is definitely one to look out for. It comes out on December 1st, and you can see the trailer here. It looks like a mindfuck, to say the least. And Natalie Portman and Mila Kunis kiss in the trailer. Well, I know where I'll be December 1st.

Lastly, just because Robert Rodriguez has all the eye candy, I leave you with this Machete promotional photo: