He's Farting Because Of His Medication.

Oh shit. It's come to this. The one movie of the year that has yet to disappoint me (besides Hanna which I can't love on enough) is Hangover Part II. How the fuck did that happen? I'll give you two words: midnight viewing. Better yet, opening night midnight viewing. Because, honestly, if you're going to see a comedy on the big screen? The only way to see it is with a large group of rowdy and obnoxious movie goers who are all pumped on opening night high (and a couple other illegal substances). Which is a giant disclaimer for "this review will be entirely colored by my badass theater experience."

The movie ran something like this: Stu is getting married and they're heading all the way to Thailand to do it. And despite Stu's best efforts to keep anything resembling a bachelor party at bay, "somehow" the Wolfpack ends up in a shitty hotel in Bangkok without any recollection of the night before. With a biker monkey, a coked out Mr. Chow, and the bloody finger of Stu's pending-brother-in-law, Teddy. So they literally used the exact same plot (down to even the minor ups and downs). So they pulled out the same gags to get the same laughs. But hell. If it ain't broke, don't fix it, right? The stakes were higher, but they didn't go over the top. Which is really impressive when you think about it, because it seems to be the comedy writer's gut reaction to go too big, too campy, and all out crazy as soon as they get a sequel budget. Here, they kept the same level of crazy, and they stayed true to the form of the original. They kept the character realism instead of turning them all into caricatures of the original movie. If anything, this one almost seemed more realistic than the first at times. But maybe it was just the grittier landscape of Bangkok and opposed to the anything-can-happen nightmare city of Vegas.
As for the Wolfpack themselves. Doug, unfortunately, has to sit this one out again. Sorry, bro, you will never be Benjamin Gates. Never. You will always be Riley Poole. Waiting with the car and picking up the checks. But you did get to deliver the line, "It's going to get worse before it gets better", so, you know. We didn't forget about you completely. Then there was Phil, the baddest man to ever wear a bright pink diaper bag. I've got to love Todd Phillips for his careful balance with Phil's character. On one hand, he's the flirtatious, wild man of the bunch. On the other hand, he's an grade school teacher and father of two. It's because he's actually so lame in reality that Phil doesn't come off as so much of a douchebag, but instead is often the leader of their ragtag bunch. Then, of course, there's Alan. Alan was everything I needed from him--always ridiculous and never quite coming to terms with the gravity of the situation. Which was especially important for this movie, since it was a little heavier on the "holy shit, we're legitimately in trouble" than the first Hangover (2009).
Nonetheless, it's clear that at the end of the day, this is Stu's movie. He's the one with the most on the line, what with this being his wedding and all, plus he's the only one that goes through any real character arc. Even if his arc was fucking ridiculous. Stu and the stripper. No words. I have NO words. Only tears of laughter and my jaw stuck somewhere on the candy coated theater floor. They fucking went there. But we've also got a lot of great bits, like Stu's obligatory song, the badass monkey who has officially replaced Scott Glenn's spot as my power animal, and every scene with Mr. Chow. Let's face it. He stole the first movie, and he's returned to steal the second movie. There's little better than the flamboyant international criminal with a limp wrist and a tiny mushroom. I said it. I'll forewarn that there's a lot (and a little) of dick in this movie. I'm going to stop dropping hints now, but it's fucking hilarious.
For last notes, the music was as completely epic as it was in the first, and we had a enough badass action scenes to keep me pumped. My only complaint was that the end somehow didn't feel quite as satisfying as the end of the last movie. I couldn't tell you why. Maybe because we'd just seen this all before. Maybe it's because the Wolf Pack didn't feel quite as pulled together as it did in the last movie. In the first Hangover, Stu hated on Alan, but he at least laughed when Alan made the baby air-jack himself. And Phil was always there to back Alan up, because he felt some strain of sympathy for the guy. But in this movie, they actually got legitimately pissed at Alan. Plus, they spent most of the movie as The Wolfpack plus one, whether that plus one was Mr. Chow or the little brother or the badass monkey. Either way, we didn't get as much Wolfpack bonding moments as we did in the first film, which might've made the ending not quite as satisfying. But, shit. It's a comedy movie with a minor in action. And a sequel. I expected it to be ten times worse than this, so the fact that I'm coming out of it with only one real complaint? Power to you, Hangover, power to you. 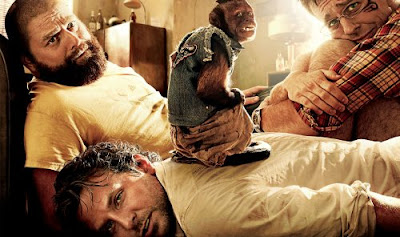 MORNING AFTER EDIT: Now that I've had time to sit on the movie, I'm come up with this: I put in an extra star there purely for the a-fucking-mazing theater experience. And the fact that I've seen SO MANY disappointing movies in the theater lately, I was overly enthusiastic to find a movie that actually lived up to my expectations.
But on rewatching the first Hangover, there is one blaring problem with its sequel that I've got to bring to the front, and that is: the Wolfpack. The real joy of these movies for me is not the eccentric characters they meet, or the funny gags--it's the intense bromance that exists between these men. These four men--Stu, Phil, Doug and Alan. Sure, we have wild and crazy scenarios, but what invests us in the movie is the bond between these men--the ups and downs of Stu and Alan's relationship, the weird one-sided romance between Alan and Phil, the way Doug seems to be the only one who can really mediate between the men. In the sequel...just we don't get that same connected feeling. Even though Doug, granted, spent most of the first movie frying on the roof, he got enough screen time with the boys at the start of the movie to develop a solid relationship with them. In Part II, Doug doesn't get any real screen time with the boys at all. Which is strike one. Strike two is Alan. Apparently, no one's talked to Alan since the last movie. Which, understandably, is realistic, but. After building up their relationship in the first movie, you kind of wanted something to continue with Alan and the gang. And then, the last strike--the Wolfpack themselves aren't even that cohesive. They spent most of the movie bouncing from weird event to weird event, and not much time with their own internal drama. Phil and Alan even have a moment where Phil tells Alan he's not his friend, but that conflict which could have been played up and had a nice pay out is instead defused 30 seconds later.
The thing is, it was a funny fucking movie anyway. What it lacked in extensive bromance, it made up for in funny gags and awesome new (and old) characters (and monkeys). But it does have its flaws, and any of those who did not get to witness the epicness that was the opening night rush might as well be warned.
Posted by M. Hufstader at 12:59 PM