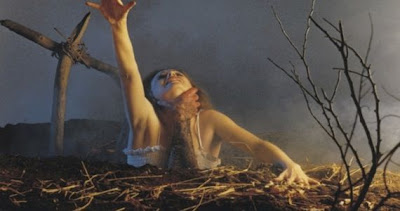 So it's no secret that I've been royally with cheese sucking at blogging. But! I am not dead! Sorry, George Lucas. I live to hate the prequels another day. I've been quietly (like a motherfucking ninja) drafting up posts, so you'll start to see a little more activity from my side of the blogsphere in the next couple days. In the meanwhile, a quick update!

1. All is well in Hotlanta. I've got a short film in post-production, and since this is the first script I've ever written that's come to life, so you can guarantee I'll be jumping up and down like a rabid Easter bunny when that shit is completed.

2. I've also been doing some good ol' fashioned novel writing. Sci-fi all the way. No details about that, but I will say my girl has forbidden me from seeing Oblivion since there are elements of the plot that look too similar. So everyone tell me that movie sucks even if it doesn't so I don't go Natural Born Killers on Tom Cruise.

3. Even though I've been AWOL, you all still nominated me for the first round of LAMMY's. What the frak? You guuuuys. Bringing back the support and voting on some badass bloggers this year.

Basically, I've been as busy as Michael Madsen, so I apologize for the very large void in the space that was The Smoking Pen. However, I swear by my pretty floral bonnet that I will return guns blazing, dick-envy swinging, pen in one hand and chainsaw in the other to deliver motherfucking movie massacre.
Posted by M. Hufstader at 9:30 AM

Email ThisBlogThis!Share to TwitterShare to FacebookShare to Pinterest
Labels: notes, returning from the dead