So I didn't really want to see this movie. I didn't. I thought this was going to be a stupid movie about Mark Walhberg's dick. I was wrong. It's an excellent movie about Mark Walhberg's dick. If you've seen Boogie Nights, you know why 13 is an important number. If you haven't, I'm not going to elaborate. And so I give you 13 inches reasons why Boogie Nights is the most badass fucking movie I've seen in a long time. 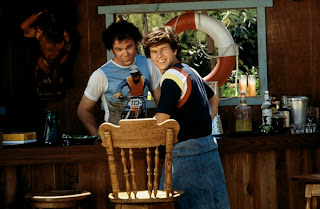 1. Dirk and Reed's bromance. I've gotta say, out of all the things I enjoyed in this movie, there was little I enjoyed more than the bromance that existed between Dirk Diggler and Reed Rothchild. Mark Wahlberg and John C. Reilly have amazing chemistry, and their back and forth banter really makes you fall in love with the characters easily. So Reed may not be the splitting image of Han Solo, but they can play like children and spend hours one-upping each other. Yet despite the constant competition, you always get the feeling that they've got each other's back, and it makes for a solid bromance.
2. Mark Wahlberg's...face. I bet you thought I was going to devote one of these numbers to another attribute of Mark Wahlberg's, didn't you? Wrong. Did I mention I'm a lesbian? But in all honesty, it makes me jealous and I don't want to talk about it Wahlberg's subtle expressions really renewed my faith completely in his acting skills. I'm speaking, of course, about the last chapter, "Long Way Down (One Last Thing)", in which Dirk, Reed, and Todd find themselves trapped in a drug lord's den. And the camera stays on Mark Wahlberg's face. For a good fifty seconds. Exactly. I counted. And in those fifty seconds, we see a complete shift in Dirk's character. A wordless, effortless self-realization of where he is, who he is, of the fact that he's hit rock bottom. It's a compliment to the director, the script, and the actor that they had enough faith in themselves and in the audience to have the turning point of the movie rely entirely on this charged yet utterly subtle moment. Aaaand I'm done gushing.

3. Little Bill's demise. It's one of those scenes you just watch, feeling the tension grow, knowing what's going to come next but not quite believing it, and then finally--BAM. And all you can think is, "Fuck, why couldn't I have written that?"
4. The characters. We actually gave a crap about them. Is the movie long? It's two and a half hours and knows it. But it's a character epic. Every character is fleshed out, important, and has his or her own story. There are no sloppy extras, no stand ins. Everyone feels like they have a purpose, which makes the world feel very real.


5. The chicks. What's great about this movie? It's about the porn industry, and yet none of these women come off as "the victim". We don't have any of that stereotypical "paying my way through college" bullshit. All these characters are here because they have a real reason to be here, they all want to be in the industry--whether that desire is a masochistic one or not. Which in turn means that we don't get any women who are victims of circumstance and therefore think they're badass because they're crass and bitter. Instead, we get women who actually take control of their sexuality, which empowers them way more than any sulking pity party would.

Amber (Julianne Moore) could have been a helpless character. While she is a tragic character and definitely has a lot of drama in her life, she's never pathetic--we see her constantly making her own choices and trying to make control of her own life. Rollergirl (AKA: the best thing Heather Graham has ever done with her life) takes control by actually enjoying her job. She respects herself, respects her lifestyle, and will stomp you in the face with her roller-skates of fucking doom if you dare disrespect her. Both lead women are powerful characters, and amazing as fuck actresses. 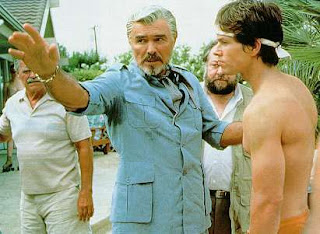 6. The dicks. The guys in this movie are just as great as the chicks. Sex is a big part of their lives, but not all of it--they've got their own complexes going on. Dirk Diggler just wants to be famous. Jack Horner (Burt Reynolds) just wants to make a good movie. Buck Swope (Don Cheadle) just wants to open his own records store. Little Bill (William H. Macy) just wishes his wife would stop sleep around. Scotty (is that...Philip Seymour Hoffman?) just wants to be loved. They're all great, lovable characters. And the acting. William H. Macy (AKA: "my fucking wife has an ass in her cock") can be my sperm donor. So can Don Cheadle. Fuck it, anyone in this movie. I can find fault with none of them. Between the script and the acting, this long ass movie has you enjoying every long ass minute.
7. Reed's poem. Everything about Reed is amazing. Porn star, magician, poet. I give you...an original work of art by Reed Rothchild.

Can you tell this movie renewed my respect for John C. Reilly and his comic timing?

9. The sex. Reason number one why this is a badass movie. Boobies. So maybe it doesn't have as much sex as Shame (2011), but it has its raunchy bits and it uses them well. For a movie about the porn industry, there actually isn't as much sex as you'd probably expect. Nonetheless, the moments they do have hot and steamy bits are used well, and help the plot along. By which I mean, Julianne Moore is really smokin' hot. On the flip side, there are other sex scenes which will not turn you on. Scenes that will give you that sick, ugly feeling in your gut when the characters spiral downhill. Which, really, is just as good. 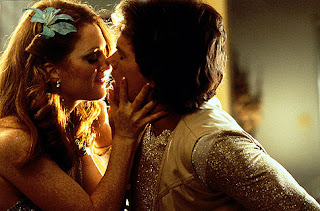 
13. The premise. It's genius. An epic about Marky Mark's dick. By setting the bar so low with a seemingly ridiculous plot that couldn't possibly take itself seriously, the movie subtly sucks you in and makes you fall for every one of the characters. It's just one of those rare examples of a brilliant concept, a brilliant script, a brilliant cast, and a brilliant prosthetic limb all coming together. 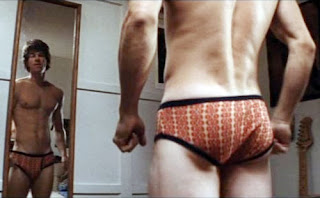 If you haven't seen this movie, give yourself an early Christmas present and check it out.
Posted by M. Hufstader at 11:50 AM