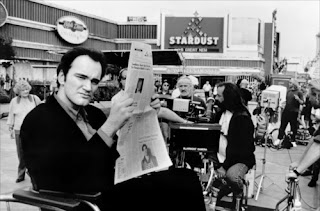 So I know I've been a little MIA lately, but I've been locked in a heated battle with The Terminator, so it takes up a lot of my time. Oh, that and moving to Atlanta. Which is wild. But which also hasn't left a lot of down time for writing up reviews. And so in trying to make some time to kick my ass into gear, a couple things occurred to me:


And so I came to the solution. A blogathon. I personally suck at blogathoning. The Incredible Suit came up with the brilliant BlogalongaBond in which everyone reviews a Bond film every month until we reach Skyfall (I swear, it's not rabies, this happens with all December movies). Even though I'm still stuck somewhere in Roger Moore while everyone else is finally climbing out of that rabbit hole, it's a great concept. So I figured I'd apply the same rules to Quentin Tarantino, since we're all of ten months away and QT has written ten films (give or take 30 minutes of Four Rooms). What are the odds, right? So if I review a Tarantino a month, the schedule comes out looking something like this:

And so this is my pet project of the year, but I'm opening it up to anyone who's interested to join in. So maybe you write a review every month, maybe you don't. Maybe you mention it in a podcast, maybe you pull an old review out from the dust, maybe you make a list ranking the badass women The Deadly Viper Assassination Squad, maybe you count all the mentions of Red Apple Cigarettes. This is the year of the Tarantino, anything goes, amiright?

Let's get this show on the motherfucking road. If anyone's interested, let me know. You can join in any time, all that jazz. Over the course of the month, send whatever you've got to mhufstader (at) gm.slc.edu and on the first of every month, I'll put up links so you can see what everyone else has got, even if I only have one madman following me on this badass fucking quest. So c'mon, daddy-os, don't be a--