Yeah. I was psyched for this one. I bought my tickets, saw it opening night, I was there bouncing up and down with untamed excitement like everyone else. And, like everyone else, I was ultimately disappointed with the movie. It was confusing as fuck. I thought the prostitution bit was reality, not in Baby Doll's head, I was wrong, bite me. I didn't like the fact that the entire movie took place in Baby Doll's head, especially when it didn't really have much grounding in reality and a forced prostitution ring is kind of a crap alternate reality to escape to (unless you're into that kind of thing). Except for the two sisters, none of the characters had any chemistry, what so ever, and most didn't even have a personality. Which was too bad, because they looked like cool characters. But you know what? That's all general consensus at this point. Everyone agrees this is not a movie for the sober brain. And yes, I'm sad, I'm disappointed, it looked like it could've been really fucking epic if only someone had said, "Hey, Snyder, we need a bit of a plot here". But I'm over it. The thing is, when you get passed all the whining and groaning, it's a fun badass fucking movie. Pray tell, M., what makes this movie so badass? Well, since you asked...
WEIRD FIRE NINJAS

They're probably the least impressive of the alternate world monsters, but that's the way they're supposed to be. After all, this is our hook, our "training session", this is what draws us into Baby Doll's badass fucking mind. And the fight scene is not to be sneered at. She jumps right into it, automatically destroying anything that crosses her path. And maybe she gets knocked around a couple times, because you know, this is her first big fight and all, but it doesn't even register since she somehow knows how to wield that sword like a BAMF anyway.
ZOMBIE ROBOT NAZIS

By far, my favorite "challenge" in Baby Doll's world. They're corpses that work on some clockwork steam thing that I don't understand, but it's badass and steam punk at its finest. I could literally spend the entire movie in this one challenge. It has everything I need to exist--nazis, zombies/robot things, elaborate nazi missions. It's. So. Fucking. Cool. THIS is why Baby Doll's brain is so amazing. The worlds she goes into, even for a brief moment in time, are ridiculously elaborate. Everything is so well imagined and thought out it's hard not to get completely caught up in the awesome that is her imagination.
ORCS ARE BACK

So we're shamelessly digging into Lord of The Rings territory here, but hey. I missed those ugly bastards just as much as the next moviegoer. And we have a cool dragon fight, so. I'm not really complaining. Though I would've thought Mama Dragon would...you know. Kinda protect her Baby Dragon a little better? Instead of just getting revenge once all was said and done. But hey. We get a cool airplane fight out of it, so I'm there.
GLASS ROBOTS WITH GUNS

Life is not easy for glass robots. They shatter every time a fat lady sings. But as soon as you put guns in their hands, whoa. Look out. And this is what I'm talking about, design wise--the world is amazing. Not only are they glass robots, but they're also on this intricate interplanetary train ride, and everything is set up perfectly in tune with the world, down to their guns which resemble those fake plastic things you can no longer buy at kid's stores (thanks a bunch, fun-hating Bloomberg).
THIS GUY

Scott Glenn. You are badass. And I want you to be my power animal. That is all.
THE SCORE
What can I say? It kept me hooked in the movie. It's definitely going to be an "acquired taste" soundtrack, but it wasn't just "background music" to keep the movie going. The film definitely wielded the music with just as strong of a hand as it did the visuals, and the two worked together to keep adrenaline pumping high at all times. And you know what? It worked. For the last half of the movie, my heart was pounding and I went into a testosterone high overdose. True story.

So for the first half of this movie I was like "Wow, this is some cutesy teenbopper movie now?". I mean, we had the rabbit face on the machine, which I get, and we were bleeping out every curse with a "Mother--!", which I can understand as well. But Baby Doll was just too perfect, and I wasn't buying it. Everyone was in love with her, she just felt like a bit of a Mary Sue. And then bitches started dying. Rabidly. And suddenly I was invested. I mean, halfway through the movie, and suddenly this movie that was cute with a gritty edge turned really fucking heavy. Technically, I shouldn't have been so gutted when these personality-less characters died, and maybe it was just because they all had cool names, but I still felt it. When these strong, powerful girls sacrificed themselves, or were even killed mercilessly by some dick who had an inferiority complex. The point is, we graduated from fluffy cotton candy chick flick to a serious epic movie where lives were at stake. The shift was sudden, it was dramatic, and it made me respect the movie all the more for it.
I FELT LIKE A PEDOPHILE 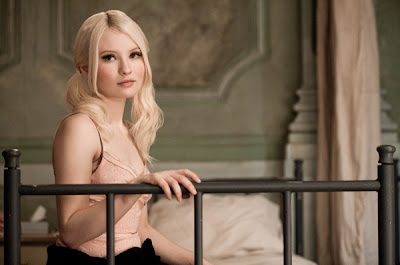 I don't know how old Emily Browning is. Early 20s or something. So technically, since she's no longer jailbait, so I shouldn't feel this bad for having the hots for her character. But when you call the character Baby Doll, dress her up in little cute outfits fit for a slutty teaparty, yeah. But Baby Doll is so hot, I'm really not complaining.
In short? I know everyone said this movie sucked. But go see it. Enjoy it. Maybe take a flask with you to get through the plotty bits. Nonetheless, it's a fun fucking movie, it's action packed, it has an amazing world and heroic young female characters (now we'll just wait idly for Hanna for a real badass female heroine). It's worth a view on a big screen. And you want to know the best part about it? It's not in motherfucking 3D. Take THAT!
Posted by M. Hufstader at 3:43 PM