A Life In Movies.

A LIFE IN MOVIES 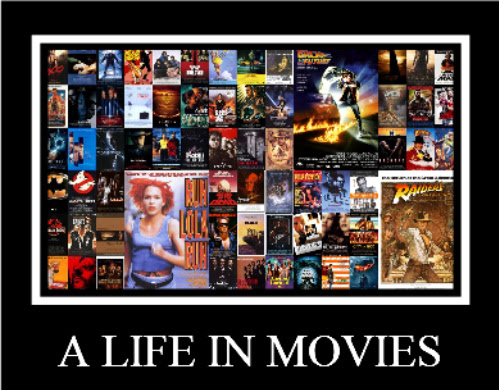 So it came to my attention that there's this awesome little blogathon created by Fandango Groovers going down called "A Life In Movies". We're supposed to post May 8th, but I got too excited (that's what he said). The premise is to start with the year you're born, and list your favorite movie of every year up to the present. It's a good way to find out everyone's age make a list of a handful of your favorite movies, but I kinda already did that. So I don't risk completely repeating myself, like the maverick I am, I decided to switch it up a bit. Instead of listing my all time favorites (i.e., movies I respect and admire for their badassitry and consider great works of art), I'm going to list my all time guilty pleasures (i.e., generally big budget fluff movies that are like crack to me and I couldn't stop watching if I tried). Without further ado... 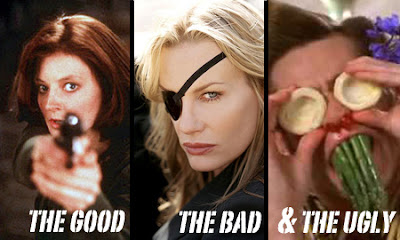 1989. Weekend At Bernies. My go-to movie whenever I had to stay home from school sick. I couldn't tell you how many times I've seen Larry and Richard drag that corpse around. It may account for my sick sense of humor.

1990. Goodfellas. Just a genius movie, no bones about it.

1991. The Silence Of The Lambs. I want to make sweet, sweet love to Jodie Foster's husky voice. Well, Jodie Foster period, but I'll take her voice, too.

1992. The Lawnmower Man. Alright. Disclaimer. I hate this movie. It is ridiculous in ways I can't wrap my head around, and I've seen some fucked up shit. However, it's just way too much fun to watch at 3 AM with a room full of friends and rip into.

1994. Pulp Fiction. My favorite movie of all time. Though I recently watched it high and got a whole different experience from it. Just goes to show you can always learn something new about those movies you know by heart.

1995. Ace Ventura: When Nature Calls. Another childhood favorite. I basically grew up watching Jim Carrey talk out of his ass.

1996. From Dusk Till Dawn. This one taught me a great life lesson: kill the vampires first, cry over your fallen comrades later.

1998. Rush Hour. I know, kill me. But it was my first Jackie Chan, and while it's hardly his best work (if anything, it's probably his worst), it made me fall for him so it has a special place in my heart.

1999. The Mummy. I bet you thought I was going to say The Matrix? Yeah, so did I. But the thing is, as dear as that movie is to me, The Mummy brings up some serious nostalgia I can't deny.

2000. Gladiator. I saw this back when I knew Joaquin Phoenix as "that dude with the weird lip". Still, it's just a solid movie.

2001. The Lord Of The Rings. C'mon. I know you can't listen to the theme song without feeling your heart swell with nerdy joy.

2002. Road To Perdition. So you know how I just said Pulp Fiction was my all time favorite? This is a close fucking second. It helped that I saw it during the period of my life when I refused to remember actors names, so I was totally blind to how many serious stars are in this movie and got to simply enjoy the pure cinematic badassness of the story and the characters.

2004. Dawn Of The Dead. I'll probably get some slack for this one, what with remakes always being crap and all. But if you forget that it's a remake, it's just a fun fucking movie. Mainly thanks to this guy.

2006. The Departed. Maybe. Maybe not. Maybe fuck yourself.

2008. Rocknrolla. Gay gangsters, drug wastelands, and everything dirty shoved under the carpet of London. Is there anything better?

2009. Inglorious Basterds. Yeah, I know. Another Tarantino take over.

2010. Inception. Because it's hard to beat the hamster wheel fight.

2011. Hanna. I would list all the ways this movie rocks, but I'm too busy being addicted to The Chemical Brothers.
Posted by M. Hufstader at 8:13 PM