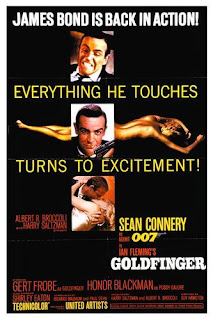 So I royally suck ass at BlogalongaBonding. I got Dr. No (1962) down no problem, somehow ended up skipping over From Russia With Love (1963), and now I'm getting Goldfinger in by the skin of my teeth. That said and done, it really would be a travesty not to review Goldfinger, since it is one of the most iconic Bond films of all time. We start with obligatory irrelevant opening sequence. And James Bond has a dead bird on his head. How can it get any better from here? But we do get a brilliant little transformation bit on Bond's part--soemthing we don't really see that much. Bond blowing something up and then doing a Superman style transformation into plain clothes. It's oddly satisfying. Almost as satisfying as Bond then going to take care of his "unfinished business" with a naked lady, only to put her in the line of fire when she double crosses him ("Shocking...positively shocking").
Entire title sequence--gold clad chicks with images reflected on their skin. So it's not quite as thrilling and CGI as the later Bonds, but there's something nice about the simplicity of it. Not to mention, Shirley Bassey pulls off a great Bond theme song--there's just something so very Bond about it. Maybe I won't listen to Shirley Bassey so much in my spare time, but she sets a perfect mood. 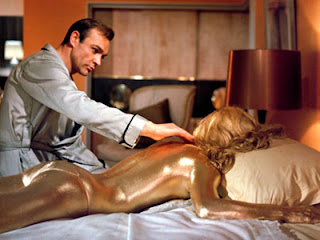 Action: For a Bond movie, it actually takes up surprisingly long to get some real action going. We don't have our first bona-fide car chase until about 45 minutes in. Equipped with satisfying cars rolling off cliffs and exploding, but still. It just takes us a while to get moving. There's a lot of talking, a lot of explaining, even a whole conversation which doesn't have much importance except for Bond to slander M.'s brandy. Less talky, more explosions.
I will say there's definitely something awesomely satisfying about watching a car getting crushed into a tiny ball, though. The movie clearly spent more time follow Oddball's venture to get this car smashed into a dense square of metal, and yet there's something about a beautiful car getting demolished under the crushing jaws of a machine that makes it hard to look away. Possibly bringing some repressed childhood emotions of The Brave Little Toaster (1987), but it is what it is.
And of course, like a surprising number of Bond films, Bond has a moment where his manly bits are in jeopardy, chained down to a plate of gold while Goldfinger's laser draws up slowly, prepared to cut him in half from the bottom up. I mean, sure, his life is in danger here, but you know he'd be sweating a lot less if the laser's aim was to slice of his neck or something.
One of the more interesting parts of the movie, however, is that Bond doesn't actually save the day. Yes, he kills Goldfinger (who knew a man that big could fit through something as small as an airplane window), and yes, he does all the secret agent stuff we require of him. But the one thing he doesn't do is dismantle the bomb. Because James Bond knows almost everything, but he can't always have the answers. And this is a great moment that Sean Connery pulls off perfectly. Bond, in his do or die glory, decides he's going to rip out all the wires since he can't find the right one and hope for the best. But just before he does--a hand on his arm. Finally. A fucking bomb technician, who actually knows what the hell he's doing, here to cut the right wire. It's a subtle moment, but one I give Ian Fleming all the more credit for nonetheless.
Characters: Bond: "Felix, say hello to Dink." Felix: "Hi, Dink." Bond: "Dink, say goodbye to Felix." Dink: *Pout?* Bond: "Uh, man talk." *Ass slap*. Oh, Bond. Aaaaand Daddy's home. Speaking of Felix. He got...old? But at least he lost his nancy boy shenanigans. And I won't say there's anything wrong with a little professionalism in a Bond movie. It's just a little uninspired. Like you know he's going to be the boring one when we're surrounded by Bond girls, devious villains, and the colorful Bond himself.
Q is always amazing. Desmond Llewelyn has my heart. Though I have to admit, the best part of the entire scene is Bond's exceddingly bored expression as Q rattles off about the beautiful Aston Martin which no doubt will be destroyed over the course of the move. And, of course, there's a red button. C'mon, Q. You know Bond better than that. Don't put a red button in his car and tell him not to touch it. At least do a little reverse psychology or something--make it green and tell him it's imperative that he touches it, and he'll probably leave it the hell alone.
Bond girls: Jill Masterson. Her entrance is definitely worthy of a Bond girl--hell, we don't even get her face. Just her back, nicely defined in a cute little swimsuit, with her leg propped up, swinging it back and forth absently. She had a nice back and forth with Bond, before one of those "My place or yours?" moments. Then we get one of the best expositions of all time. Bond and Jill are both halfnaked, making out in his bed, as the radio beside the bed croons with: "At the white house this afternoon, the president said he was entirely satisfied--" after which Bond cuts it off. We don't even need his clever: "That makes two of us." We got it the first time. But it's all worth it for what happens next...an unconscious Bond and a golden Jill. Really, what do you say to that? It's a horrifying, yet brilliant death.
Let's put sister with sister. Tilly Masterson is up next, and for the short amount of time she's in the film, I've gotta say I quite like her. She is one of the few Bond girls who can kind of shrug Bond off without batting her eyes at him the next second (more on that later). She goes so far as to quite literally cut him off in the middle of his "Bond, James Bond". Who does that? Tilly does that. Usually, when Bond doesn't get with a Bond girl, I'm left feeling as unsatisfied as he is, but here I was down with it.

And finally...last but definitely not least. Pussy Galore. Played by the lovely Honor Blackman, one of those actress that kind of grows on you as the movie progresses (or as she starts losing clothes...ah, chicken and egg argument there). They went all fucking out with Pussy Galore. And I loved every inch of it. After two strong, bull busting women, she kind of felt like a bit too bull busting, just because the act was running thin. However, she had one thing going for her that most Bond henchwomen don't. She didn't sleep with Goldfinger. Instead? She had a harem. Of women. Who fly planes. Does it get any better than that? I think not.

Villains: A moment for Goldfinger, now. He has probably the lamest Bond villain entrance ever onto the screen. He's in some pool resort which looks like it should be habited with spring break kids and old grandmother. Goldfinger, in his swim suit and towel, looks to be part of the later category, like he's ready for a game of bingo and a laxative. He doesn't strike you right away as the kind of guy who's about to swindle another man out of large sums of money via card games. Meanwhile, he's got a little bird perched up on the balcony--our dear Jill Masterson, who watches Goldfinger's opponent through binoculars and recites his cards to keep Goldfinger winning. You think the other man would've started to get suspicious what with an ear piece sticking out of Goldfinger's ear, but hey. He's got sunscreen in his eyes. It really is a massive blindspot that Bond challenges Goldfinger to a golf match. Really, first it's the old people's pool, now it's a golf match--is there anything about Goldfinger that doesn't scream Republican head of the NRA? He even has a freaking Asian manservant. A mute one, at that. Speaking of...

Oddjob is possibly one of the best things about Goldfinger. He's a mute who can crush golfballs under his bare fist and he's got a bowler hat that kills. I'm sold. Even though his hat has unpredictable properties. One second it cuts through stone and slices off a statue's head. The next, it just somehow bloodlessly knocks Tilly over and kills her. Go figure.
My next favorite henchman has but a near cameo. But I'm sorry. If you're a grandmother with a machine gun and you still manage to almost knock Bond off his wheels, props to you.
Most badass moment: Pussy Galore's Flying Circus. I rewound and watched the entrance of those girls about ten times. Goddamn.
Most ridiculous moment: Goldfinger's delightful gang of investors might as well be known as the men who ask 1000 questions. "What's that?" "Why's that moving?" "Where's my pacifier?" Babies.

Quotes: This one had some classics, alright. Some of my favorites...
Pussy Galore: "My name is Pussy Galore."
Bond: "I must be dreaming."


Bond: "Do you expect me to talk?"
Goldfinger: "No, Mr. Bond. I expect you to die."
Bond: "This is no time to be rescued. "
Bond: "What do you know about gold, Moneypenny? "
Miss Moneypenny: "Oh, the only gold I know about is the kind you wear... you know, on the third finger of your left hand?"

What the hell: Here's a bit of frustrating trivia--Tilly Masterton, Jill's sister, is supposed to be a lesbian. Who is attracted to Pussy Galore. WHY, MOVIE BOND, WHY? Of all the things you can cut from the book, you're going to deprive us of a lesbian Bond girl moment? I'm tempted to knock this movie down a rating just for that.
Posted by M. Hufstader at 4:06 PM