"Fucking Females Is For Poofs." 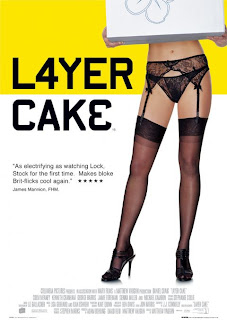 In the style of Guy Ritchie's earlier films (Lock, Stock, And Two Smoking Barrels), Layer Cake gives us our hero, Your Neighborhood Friendly Drug Dealer. Also known as XXX [character's name modified for the purposes of fulfilling movie watching]. I know what you're thinking. Goodfellas, Scarface, Pineapple Express. That dude Brad Pitt played in True Romance. No, no, no. XXX, portrayed by one of my favorites, Daniel Craig, is not like that at all. He's a down to earth modern day Odysseus with a suit and a stubborn attitude. Everything must be clean, clean, clean. He runs his business, nevermind that he'd dealing drugs. Business is business. He keeps his nose out of the dirt and lets everyone else do the heavy lifting political banter. In fact, he's even taking the high road and getting out while the gettin' is good. Yes indeed, life seems good for our friend XXX. Except for one problem. He's too good at his job to get out and now that he's trying to scram, he's making friends with all the wrong people. And he stumbles his way through the thick of it, losing ground fast into the sink hole of drugs, money, and guns while still trying to keep his face clean and his tie straight.
I first saw this movie when rumors of Daniel Craig were just starting to filter in from that thing we call the internet. And I thought, Yeah, okay. I can see it. I like to think of this movie as the reason anyone might've thought he would make a good Bond. Because, let's face it. He's not your poster boy for smokin' hot (though he can give this lesbian a woody any day of the week). He's not particularly witty. And you have to pull a couple of teeth to get a good smile out of his permanently frowned mouth. But if Layer Cake does anything, it makes a 007 out of him. Only a 007 that does just about everything wrong, is hardly suave, and is extremely anal retentive yet somehow undeniably charming, loveable, and--wait for it--badass.
Other worthy mentions in this movie go to his two cronies, Morty and Gene. Morty, played by George Harris (most commonly known these days as Kingsley Shacklebolt, AKA, Could He Be Anymore Stereotypically African?), is XXX's harder-than-stone partner in crime who's rejoined the gang after doing ten years jail time. He keeps his mouth shut and his blood temperature level for the most part, but when he explodes...you sure as hell better hope he's not going to go off on you. The fight scene (or should I say the beat-to-shit scene since the opposing party didn't have a chance to put up much of a fight) between him and the man who put him away is epic. The Brits do love their tea.

The second honorable mention goes to Gene, played by Colm Meaney, one of those actors who's been in...just about everything, but you still love him for it. Gene knows his guns like his cock and he's probably one of the more bona fide gangster types in the movie. And for a gangster movie, this one pokes a lot of fun at gangsters. On one hand, we have The Duke (Jamie Foreman), who's one of the most inept wanna be gangsters on the screen. Then we have Crazy Larry, who I wish they'd done a prequel of just so I could see Jason Flemyng's ridiculous hair for another two hours. Last but not least, a shout out to my boy Tom Hardy who went really quite fey, and XXX's love interest Tammy, who was played by Sienna Miller's ass and legs.
All in all, I really do love this movie. It's entertaining, it's bloody with a sense of humor, it takes occasional risks with the style, and it has some top notch actors. Not to mention, it deals with all of the stuff that all the other gangster movies forgot to mention. Like the fact that most self-proclaimed gangsters are complete fuck ups, that killing a man actually does do some pretty shit things to your soul, and that the underdog does not always win.

Because I'm a bitcher, I will bitch about a thing or two, though. Number one, I've seen this movie multiple times and I'm still not crystal clear on what exactly happened in the plot. But I blame that on book to movie adaptations. And this is just me being a stupid American, but I definitely missed about a couple good sentences here and there due to the thick accents. I had to watch it with subtitles with my parents. But a complex plot and nonsensical talk is a trivial complaint when it comes to a movie as fun as this one is. Oo th'fock needs it anyways, eh?
Oh, and Daniel Craig's character? His name? Well, to figure that out, you'll have to see the--
Posted by M. Hufstader at 8:54 PM