Meanwhile, the wind howls outside and rips through trees, Irene ragging and raging. Shackled down behind boarded up windows and doors, OUR HERO dismally awaits the power outage as the lights flicker on and off. Absent fingers wrap around the first movie from a pile of five, determined not to take any chances at boredom for the next couple days. She presses the shimmering disc into the player and makes herself at home on the couch in the dark as the screen hums to life. The music plays, the awkward monologues running, the characters shaking the dust of their shoulders and coming to life. And--

SHE BEGINS TO BELIEVE IN MOVIES AGAIN!
Such was my experience of belatedly finally getting around to Kick-Ass (2010). The thing about Kick-Ass (2010) is its the first movie I've seen in a while that actually knows its audience. If you're going to make a superhero movie, who likes superheros? Nerds. Great, throw in a nerd as the main character. And what do comic books have copious amounts of? Cartoon violence. Throw a shit ton of that in there. Who likes violence? The mafia. Great, give our villain roots in the mafia. And you're good to fucking go.

Granted, this movie got a hell of a lot of help from the fact that it was based of a comic book. Still, what I give this movie the most credit for was the fact that it didn't shy away from anything. We had 11-year old assassins, who literally had a thirst for blood. No toning that down. This isn't Spy Kids, after all (still love you, Rodriguez). Not only that, but the stakes are high. It plays with a comic book lightness, but there's heavy weights on each of these character's shoulders. As Nicolas Cage's character, the assassin father figure says, they've "turned it into a game". Behind the shiny costumes and the quick one-liners, we've got betrayal, death, vengeance. This could've turned into Boondock Saints (1999) if they weren't careful. On top of that all, these kids get into some serious fucking trouble. These aren't sandbox sports. They get threatened, tortured, and beaten to all hell. And yes. Mark Strong roundhouse kicks a 11 year old girl in the face and I suddenly love him even more. Whatever that says about me. 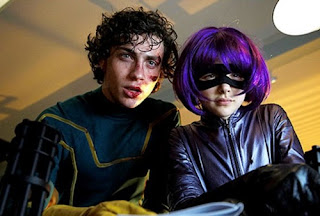 Aaron Johnson was an entirely believable scrawny little nerd boy. I've been there and done that, and he nailed it in ways Michael Cera and even that-kid-from-Zombieland (sorry, is everyone calling him that-kid-from-The-Social-Network these days? Tallahassee will beat your ass any day of the week), haven't been able to do. Still, he was probably one of my least favorite parts in the story, especially by time we got around to the second half. Don't get me wrong, he was a necessary vessel to carry the story, but I didn't really give much of a crap about his journey. Especially his half-assed romance. What, no tits? I don't think the movie particularly suffered because of it, but I could still have done without the little love story, refreshingly unconventional though it was.

As for the other actors, I could find fault with no one. Mark Strong was amazing, but he always is. Even if his British weaved in and out of his accent at the start, he nailed the role anyway, playing the perfect tough-guy take-no-prisoners gangster. Cool forehead scar and everything. I could literally watch that scene where he riles himself up enough to get back on the powder about a million times in a row (aka: "Mommy? I want a Kick-Ass party. Dumb little fucks."). And even though they only had one real scene together, his chemistry with Chloe Moretz was off the hook. But it might've just had something to do with the fact that they were the two most badass characters in the entire film, and the reel sizzled a little when it tried to fit them both in it.

There is nothing I don't love about that little girl. She could handle her weapon, didn't shy away from the sight of blood, and had a daddy-sized chip on her shoulder. She has the same makings that most every other badass action hero has (from The Bride to El Mariachi), only she's an 11 year old girl, which just makes her that much more awesome. I regained my respect for Nicolas Cage as he played her weasely Sorter-esque hitman father. Nothing can really redeem him for making me pay money for Ghost Rider, but he's getting there. Lastly, Alex de Large made an appearance, I'm thinking he must've been hot on the scent of blood.

In short? I don't know why it took a damn hurricane to get me to see this movie. The characters were badass, the untamed violence was perfect, and the story was tight. Plus, with Mark Strong, Dexter Fletcher, and Jason Flemyng, I'm feeling a Guy Ritchie reunion coming on. Oh, and did I mention there's a fucking bazooka? Thank fuck for Irene.
Posted by M. Hufstader at 8:48 PM