And so it's begun. We've officially left the era of BAMF Sean Connery and entered the age of Moore. For all the slack I give everyone-who-isn't-Sean-Connery, I will say that Moore got off on a pretty good start with this movie. It's one of the simplest, easy to follow Bond films with a straight-forward plot, enticing characters, and good drama. It's a solid script, which is something the Bond franchise definitely needed after that kaleidoscope of madness that was the plot in Diamonds Are Forever (1971).

I'll start off, as always, with the opening credits. The music is great--Paul McCartney's Live And Let Die is fantastic. Plus woman's face turning into a skull with flames? Awesome. I'm there. The only thing I'm no on board with is...well. Everything else. I'm not quite sure what the theme is they're going for, the images are a little disjointed. And I'm pretty sure the title sequence women stole napoleon dynamites moves. Moving on.

Characters: For the good guys, I quite liked David Hedison's Felix Leiter. He's just the sort of quick, no-nonsense American I'm looking for in a Bond movie. As usual, he doesn't really do anything of any real consequence, and you have to wonder why Felix Leiter shows up in Bond movies at all. Nonetheless, he's a fun guy to have around for the first half, and I enjoyed him.

Now for my favorite. Sheriff J.W. Pepper (also known as, character actor Clifton James). I don't think I've ever seen a more dedicated sheriff. Or a more dedicated anyone in a Bond movie. He literally steals the entire 3rd act, bumbling around from cop car to cop car, trying to reign in James Bond. His character is so big, so loud, and so magnetic, we totally forget about Bond and spend the rest of the time worrying about Pepper's plight. Sure, James Bond is in the middle of some...high action boat chase, but--look, there's Sheriff J.W. Pepper spitting again! And don't forget about his bruda Billy Bob! Cinematically, this character is not only completely useless and unnecessary, he's actually getting in the way of the plot and entirely destroying the tension of the boat chase. The actor is so fucking delightful, I'm happy they kept him in. But honestly, I would've been happier if they made a Sheriff J.W. Pepper spin-off and let a Bond movie be about Bond. Or, at very least, cut the scene down so it doesn't run some fifteen minutes.


Bond girls: On a while, the Bond girls are pretty fucking weak in this movie. We have our main girl, Solitaire, played by Jane Seymour. How do we know she's our main girl? Well, she's the white one. Oh. Well. Ahem. Anyway...Solitaire's not a bad character. I like her. Mostly. I like her costume, I like her doe eyes, I like her flighty attitude. I would've been happier if she'd actually gotten crushed to death by the train's cot, but hey. Death just wasn't in the cards for her.

Next we have Rosie Carver (Gloria Hendry), who is the most useless Bond girl ever to grace the screen and admits it. Alright. That's unfair. It's pretty fucking hard to be more useless than Honey Ryder. But the thing that really pisses me off about Rosie Carver is that she has so much potential to be badass. She's supposedly CIA, yet she doesn't understand the safety switch on her gun. She has epic muscles, but she can do nothing with them. Apparently they only thing she can do is scream. She doesn't even get a proper sex scene! Overall, the character of Rosie Carver just straight up frustrates me. I'm sure she's Guy Hamilton's attempt to pretend like his movie isn't absurdly racist, but if anything, the presence of Rosie Carver just reconfirms it for me. 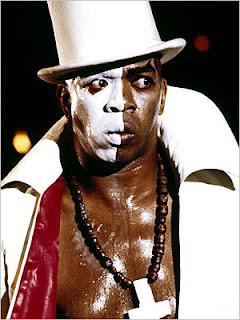 Villains: Finally! We're getting somewhere. Mr. Big is great. Yaphet Kotto totally nails the role of smarmy, volatile villain. He's got a fierce possessiveness over his "things" and a temper to match. The scene in which he pulls the truth from Solitaire about her rendezvous with Mr. Bond is fantastic.

As for the henchmen, I'm a fan of them all. Tee Hee is great as well. For one, who the fuck names themselves Tee Hee? For two, he has a hook. For a hand. A metal-crushing hook, replacing the arm he lost in a fight with a fucking alligator. Come on! It doesn't get much more badass than that. Whisper is also excellent. Even if he is a one trick pony. He truly is the last person you want warning you that Bond escaped his ropes and is coming the hell after you. Lastly, Baron Samedi (Geoffrey Holder) is Tim Curry flamboyant and just as fantastic. He plays a brilliant voodoo man, and is not afraid to be campy as all hell. You go, Baron Samedi.

Most badass moment: Normally, I'd say the stunts in the boat chase, but it lasted about 15 minutes so I'm going to have to rule it out. Instead, I'm going to go with Mrs. Bell's flying lesson. Even if solely for her expression.

Most ridiculous moment: Why does Bond have the time to make an entire card deck with a single playing card in order to woo the tribal headpiece off a woman when he should just be suave and impulsive?

Mission report: I bet you all expected a lot of weeping over Sean Connery and a giant list of all the ways Roger Moore doesn't live up to the original Bond, what with this being Moore's debut. Well. So did I. Except for the fact that I was so distracted by the fact that this is the most racist, classist, and sexist Bond movie to date. Sexism in a Bond movie...alright. I'm over that. I can handle it. You've come to expect that. Rosie Carver pissed me off, but I can live with it. But the giant shit the movie takes on Louisiana is unforgivable. Which is a shame, because I love New Orleans dearly, and a Bond movie taking place in New Orleans should have me salivating. But the things is, there's no actual evil organization. I repeat, there is no actual evil organization. Instead, every single black person in the world is out to get Bond. I which I was joking. The taxi driver. The voodoo store owner. The parade dancers. Even the fucking shoe shiner. Every single black person in this movie is evil...with one concession. Bond's lazy boat driver. Riiiight. Okay. Because that's not troubling.


To make it better, they use lines like "Get me a make on a white pimp mobile" and "Hey man, for 20 bucks I'll take you to a Klu Klux clan cookout." There is really no shame in this script. At all. And I could brush it aside and say "Well, it's just one of those old movies", but it's not. This is '73. In '71, Bond was fighting Bambi and Thumber, and interracial team of female gymnastic assassins. There is so much wrong with the plot I actually have very little to say about Bond himself. Roger Moore doesn't really impress me, but he doesn't leave a bad taste in my mouth. The end. Maybe I'll have more to say about him the next time around.
The truth of the matter is, I really wanted to give this movie 4 stars. It has some great moments. The sets were great. The henchmen and villains were great. The New Orleans funeral was creative. The oyster truck is the shit. But the racism was just a little too much to stomach. Oh, and the special effects were beyond bad. Especially the plastic snakes. I find myself missing the dragon tank from Dr. No.

Solitaire: Is there time for lesson number three?

State Trooper: Yessir. J.W., let me have a word with ya. J.W., now this fellow's from London England. He's a Englishman workin' in cooperation with our boys, a sorta... secret agent.
Sheriff J.W. Pepper: Secret Agent? On whose side?!
Rosie Carver: There's a...
James Bond: Oh, a snake. I forgot, I should have told you. You should never go in there without a mongoose.
Aaaand I'm officially only one Blogalongabond movie behind! *Pants*
Posted by M. Hufstader at 5:27 PM