Time to say goodbye to suave, witty, and badass Sean Connery, and hello to the Australian male model, George Lazenby. Skeptical? Me too. I'll give them props for at least do a tasteful turnover of actors. We get a slow introduction to Lazenby...a car chase, lighting a cigarette, taking a sip of smoke through his lips. Sitting beside his gun, his hands on the car wheel, the binoculars covering his face. They hold out on showing him as long as they can, until finally the reveal, complete with the ever satisfying, "Bond, James Bond." But can Lazenby fill the big shoes Sean Connery left him? Read on to find out! I'll give you a hint: the answer is no. 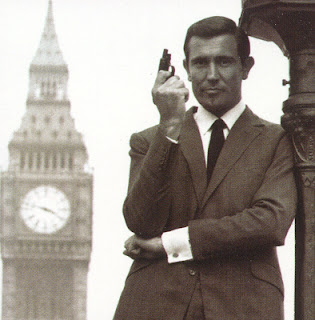 James Bond: George Lazenby. It's not personal. Really. Truth me told, he does his job to the best of his ability. He's very straight face, he's got some charm, and he does a good job with halfhearted double entendres. But he's just...how do I put this? Too fucking posh. Maybe it's the way he carries himself, or the fact that he spends half the movie in a skirt, or the fact that most of his fight scenes involve skiing and turtlenecks. I'm just finding it hard to believe he'd really be willing to get dirty. This isn't to say Bond isn't posh, exactly. Sure, he likes the high life. He lives it up. But there's also something very rugged about Bond. Something that says even though he likes fancy cars and nice hotels and women in furs, he also doesn't mind rolling in the mud and chopping down trees and doing hard, manly work. And there's something about Lazenby that makes me think he lifts his pinky when he drinks his tea. Most probably has something to do with the fact that he sounds like an old lady when he fights.


There's also a different between being as careless as a boy, and as irritating as a boy. Bond generally isn't very mature, period, but his boyish attitude comes out of his recklessness. This Bond is more like that irritating kid in the back of the bus who won't stop telling everyone about his cool red Power Ranger toy. He's way too chatty. There's witty banter, and then there's shut the fuck up. Not to mention, he's a petty little shit. He gets in a fight with M. over a mission, and after not getting his way, threatens to resign. Really? Why call the movie "On Her Majesty's Secret Service" when he's willing to resign over a petty argument? But hey, guess it doesn't matter because M. rolls over like a useless dog for Bond.


Bond...in love? We're introduced to Bond's love interest while he's playing cards with a pair of tits. Oh wait! That's not just any pair of tits, that's Tracy Di Vicenzo's pair of tits, hanging off the lovely Diana Rigg. In all truthfulness, Tracy is my favorite part of this movie. She makes for a great Bond girl--she's sassy, she's got connections, and she's aloof. The Bond girls always "try to resist" James Bond, but Tracy is one of the few who pulls off her distant attitude well. I think it can all be summed up by the fact that he more or less prostitutes her into his bed for the first time after she loses money she can't pay back in a game of cards, and her reaction to his advances is a simple, disinterested, let's-get-this-over-with "Hm". If nothing else, she makes for a good challenge. 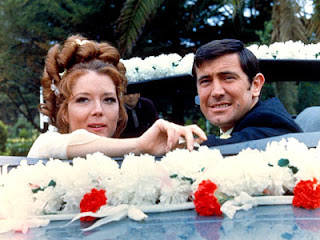 Meanwhile, Bond and Tracy start to fall in love. Whodathunk? And this is the only Bond movie in which, halfway through, we get a montage of Bond and the Bond girl falling in love. Not a car chase, not an explosion, no. Instead, he's taking her on dates, walking through the park with her. Who switched my movie with Breakfast At Tiffany's? Allow me to sleep through his section...

Bond girls: Hey, a roomful of Bond girls! I'm awake again. It turns out, Blofeld has a room filled with sex starved young women who are there...to heal their allergies or some convoluted fucking plot. And what does Bond do? He gives the sex-starved chicks a lesson on the word genealogy. While they all eat dinner seductively. There's a banana in the mix. It happens. But, of course, after dinner, all the ladies want a little dessert. And so he proceeds to have a good twenty minutes hoping from bedroom to bedroom, having his way with the women of the place. This won't end badly. Not at all. Except for the fact that it does when it ends up blowing his cover. Er...whoops?

Villains: Well, I figured, even if the rest of it isn't great, it has Blofeld, and he's going to be awesome, right? Well. No, not right. He's actually really fucking boring in this movie. He's got the most over elaborate world domination plot, and he cut off his earlobes. Er. Not really all that sinister.

However. There is one villain who stands out among the wreckage. And that is Irma Bunt (Ilse Steppat), also known as the deadliest cock block known to man. She's mean, she's got a face like a bulldog, and she's got a thick "don't fuck with me" accent. She's one of those women that would be terrifying if you just happened to bump into her on the street anyway, but since she's an evil henchwomen who's manipulating an army of Bond Girls, yeah, I'd say she's pretty fucking badass. Plus, she kills Tracy, so props for her.

Most ridiculous moment: As Bond waits for his safe-unlocking device to work, he flips through a playboy. Bitch, Bond doesn't need a playboy to look at breasts. He snaps his fingers and breasts magically appear. On a silver fucking platter. With complimentary twins. What is this?


Overall: The thing is it's not a particularly bad movie on its own. It's very much a British spy film, complete with various Bond costumes and deceptions, his complicated love affair with Tracey, kilts, curling. It most probably resembles the slow pace of the book more than the other movies. It has its charms. But it's just...not a Bond film. There's not enough car chases, not enough explosions, not enough sex. It didn't help that it felt like two completely different movies in one. First, we have Bond propositioned by a mob boss to marry the boss' daughter and all the complications involved in that. Second, we have Blofeld hypnotizing women who have allergies so that they might become some deadly squad of assassins or something like that. The two probably have some connection, but if they do, I missed it completely. The only way they intervene is that Tracy "just happens" to show up at the ski rink. Convenient, no? But convenience is kind of the name of the game with this movie, with cute little gimmicks that I could do without, like a car chase "just so happening" to break into a car race. Overall, I come out of the movie with one reaction: "Ehhh."
Posted by M. Hufstader at 8:24 PM