"I'll More Than Alarm You."

Everyone's thinking it, not so many people are saying it. Let's just go all out, shall we? I call it...BATTLE OF THE REMAKE! In one corner, those crazy Swedish bastards. In the other corner, AMERICA! It should be known that the referee is only literate in the language of Chuck Norris' body hair, so she was unable to read the novel these movies were based on. It should also be known that copious spoilers lay ahead, and honey badger don't give a shit. Let the fighting commence! 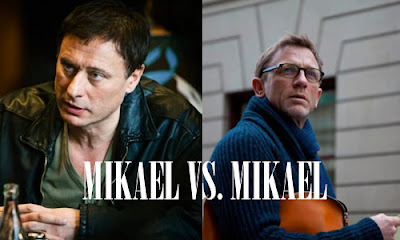 The thing that really sold the US version of Girl With The Dragon Tattoo for me was the new and improved Mikael. Honestly, I can't tell you what it is about Michael Nyqvist. Maybe I just don't like his face. Whatever the case, Nyqvist bored me to tears. I couldn't get into his character, I couldn't get into him period. But I didn't really have time to care because I was too busy drooling over Noomi Rapace's awesome. Either way, I went into the US version expecting much of the same. Sure, I love Daniel Craig and I've got a lot of faith in him. But Mikael is just...a white rice character. Well. Let's just say I was pleasantly surprised, and I owe 99% of that to one very important character. The cat. I don't know what it is, probably a cat woman dyke thing, but watching 007 play with a kitty cat is incredibly endearing. And so I decided Mikael could have a place in my heart. He likes cats, he's got a good personality, and he's got multiple little faucets of his self for us to touch on--his affair, his ex-wife, his daughter. All of it rounds out to a good, interesting Mikael Blomkvist. In short, Daniel Craig has to work very hard to disappoint me.

And the winner is...Daniel Craig and his pussy. 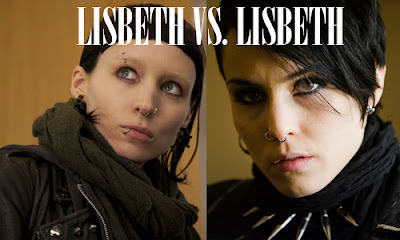 Ah, what I wouldn't give for this to be a physical cat fight. The thing about Rooney Mara is I liked her. A shit ton more than I thought I would. Let's face it, the woman had big shoes to fill and tiny feet to fill them with. But instead of completely trying to replicate Noomi Rapace's job well done, she took the character down a La Femme Nikita road. Lisbeth became much more pure animal instinct, and for that, I have to give the little ball of energy Rooney Mara mad props. But with her almost too-intense eyes peering out of her doll face, she felt less like Lisbeth Salander and more like something Tim Burton might concoct. Noomi Rapace is a gritty, badass punk who still carries with her a sharp edge of humanity underneath the smoldering flames of the violence that lives inside of her. Or I just want to get in her pants. Either or.
And the winner is...Noomi Rapace (be still my beating heart).
Round Three: 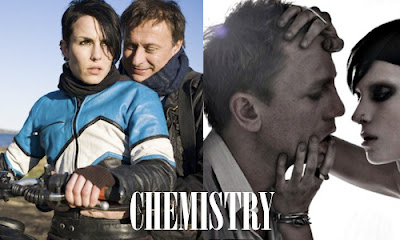 If anyone remembers my previous review of the Swedish version (The Girl With The Occasional Hangnail), you'll know that I bitched at length about Mikael and Lisbeth's relationship. There was just something about it that simply didn't sit right with me. Then I saw Craig and Rooney Mara. I do get the feeling I might have been subliminally forced into liking it since there were so many attractive promotional images of the two together. Nonetheless, Mara and Craig had great on screen chemistry. They worked brilliantly off each other, and despite their clear differences, somehow seemed to fit. I think what it all comes down to is the fact that Fincher took the time to include trivial, yet touching intimate moments. Something as simple as Lisbeth demanding Mikael to keep his hands on her while she worked somehow added that much more to their relationship, making it feel natural and flow easily through the movie instead of forcing a connection.
And the winner is...Daniel Craig and Rooney Mara.
Round Four: 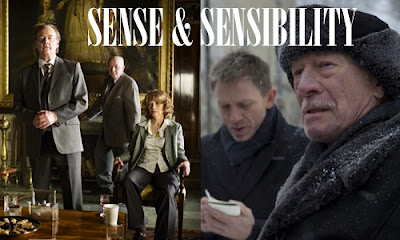 Also known as, "and then another incestuous Swede walks into a bar...". One of the main problems with the first movie was that I just couldn't follow along. Maybe it was the subtitles. It's entirely possible I'm just that much of a stupid American. Whatever the case, everyone just felt like another Swedish Nazi having sex with his sister. In the American version, Fincher seemed to breath a little more life into the important family members and then shrugged off the rest of the snippy old bitches like dried up snake skin. Sure, I'm sure important plot points were lost thanks to America's "time is money" philosophy. But who really wants to listen to Aunt Helga whine and cough up cat fur?
And the winner is...David Fincher.
Round Five: 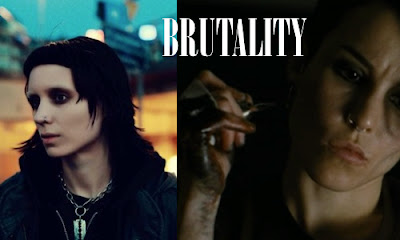 Alright. So I'll be blunt. With tag lines like "the feel bad movie of the year", I was expecting to feel a little more brutalized. Yes, the rape was brutal as all hell. Yes, the post-rape shower made me physically uncomfortable. Good job. But skip ahead a little bit to Lisbeth's revenge. Yes, she goes through the exact same motions. But what's that? While she was tying her rapist up, she had time to do her makeup? So you're telling me she just decided, in the middle of this emotionally and physically violent scene, to play a little dress up? Alllllrighty then. Skip ahead a little more. When Mikael is squirming between the jaws of Vanger Jr. Martin Vanger has Nazi blood, a childhood fraught with violence, and he's a pathological sadist who gets off on brutally raping and killing random women. Got it. Now look at Craig. He looks...vaguely uncomfortable? He's got a neck brace on. Now, I'm pretty sure anyone who's ever had to wear a neck brace will tell you how extraordinary uncomfortable they are. Because, you know. They chafe and stuff. Right. Now let's skip to Nyqvist, who has a hangman's cheap noose wrapped around his throat. Call me old fashioned, but there's something about Nyqvist's torture that hits a more visceral note, despite Craig's good acting and the excellent help of our friend the plastic bag.

What I'm trying to get at here is between the heavily made up raccoon eyes Rooney Mara sports while she sodomizes her rapist and the odd little neck brace, I get the feeling Fincher got a little caught up in the theatrics when he really just needed to zero in on the genuine, visceral, bloody heart of the moment. The more visually appealing brutality is, the less it hurts. I know what you're thinking. M., lay off. It just looks cool. You're right. You're totally right. I mean, it's not like people are going to entirely miss the point of the movie and make a clothing line based off a mildly psychopathic rape victim, right?...Guys? Right?
And the winner is...Noomi Rapace and her terrifying tattoo skills.
Round Six: All's well that ends well. Or, you know. Drags out to the point of nibbling on popcorn kernels. Here's the thing. We kind of...don't give that many shits about Mikael's case. It was just a plot device used to get us to this super interesting missing woman case, and now that the case is solved, mission completed, job well done, we're ready to pack up and go home. Alright, so I get that this one isn't that easy to wrap up, we have to explain how Mikael gets off, we have to give Lisbeth a last moment of badassitry, we have to see our hero ride into the sunset with...well...a girl. But did it really need to last as long as it did? I was having LOTRs deja vu watching the multiple endings drag out in front of me. Yeah, so the Swedish version dragged on just as long. But somehow I expected it to drag, since the whole movie had been a lot slower, a lot quieter. Fincher's version was much more fast paced and action packed, so when he dragged his feet through the end, I felt it.
And the winner is...Zer Svedish.


And The Winner Is...
Er...that's a bit of a tough answer. Especially considering the fact that they've officially tied and I've got no tie-breaker. Look, what it comes down to is, they were both excellent movies in their own right. Usually I feel strongly about one version, but this time I could swing either way. Really, if we could just do this movie one more time mixing and matching the best bits from each movie, I'd be happy. As it is, I'll be content to watch both versions multiple times to satisfy my masochistic love for this brilliant, dark movie.
Posted by M. Hufstader at 1:54 AM