Are You There, God? It's Me, Marky Mark.

Everyone's had that moment. You watch the trailer, it's great, you're psyched. Then you go to the theater and leave feeling cheated out of your money and violated. I always assumed there was nothing worse than that let down. And then I saw this movie. Max Payne commits the crime of a well-done, exciting set-up...and then falls on its face by the third act, leaving you to wonder whether the writer didn't have a brain aneurysm on the table and slammed his head against the keyboard a couple times to finish the story. It's not the plot. There have been some very good combinations of murder noir and religious mysticism. This just isn't one of them. It's not about the actors. Even if they all look like some casting director's second choice, they pull it off well. And it's not about the characters. They're all solid. The fall of this movie is simply that, like a Harvard girl turned stripper, it makes some bad decisions down the road and doesn't live up to any of its promises.
It sets us up with a good start. The whole thing is very murder noir, very eerie. The tone of the movie is great, there's a lot of evil "fans slicing through air" shots, and grundy, dark scenes. Our main guy is interesting enough--Max Payne, played by the hardass version of Mark Walhberg. He's got the classic hangups: his wife and kid were murdered and he was all of ten minutes too late. So it's a cliché problem we've seen before, but you know what? It always works. If it ain't broke. So instead of spiraling into an alcoholic depressed mess, Max decides to channel his rage in a different way--he chases down unsolved cases and beats criminals to shit, looking for the one that got away--the man who killed his family. Yes! A vengeance flick! I'm so on board. Tell me more, Max Payne, tell me more, like does he have a car?

But, like all good detectives hell bent on his own self-destruction, Max gets in too deep. Following a hot tip, Max finds himself in a club full of nefarious types and smoking hot women. AKA: the gorgeous Natasha, AKA: Olga Kurylenko, AKA: motherfucking Bond girl. Her performance is short lived, but sure as hell memorable. And she introduces us to the next best thing--pseudo-dominatrix Mila Kunis who plays Natasha's Russian gangster sister, Mona Sax (you say sister, I say lesbian lover. Don't worry, John Moore, I'm rewriting your script, it's coming along great). Max gets mixed up with the sisters, all the while being hunted by Jim Bravura, a straight-edged detective played by Ludacris (am I the only one who gets really excited when I see rappers act...and act well?). So far, this movie has the makings of everything I want out of life.

And then the angels come. The angels are these strange Norse myth beasts that come out of the shadows and fuck your shit up. Okay. This setting is over the top as it is, I'm cool with introducing strange mythological beasts into it. Really. I don't have a problem with it. What I do have a problem with is the only time anyone sees these angels is when they're tripping off this drug that's a big "government military secret". I'm down with a secret military drug that makes soldiers super human. I'm down with mystical angels. But it's got to be one of the other. Why, you ask? Well. Enter Act Three. 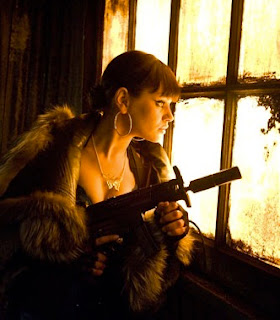 It's right at the top of the screenwriter's handbook 101: your main character cannot be forced into the third act. They have to make a definitive choice that steers the final act of the movie, or else they're just a boring as shit main character. After a series of (fairly well done) action sequences and various interrogation sessions, Max Payne finds himself betrayed by his best friend and sinking quickly to the bottom of an icy river. And so Max saves his own life by drinking the punch--he downs a vial of the super secret military drug that makes you super human. And then everything goes to shit. Really. If you ever watch this movie, just turn it off when he hits that icy cold water. Make up your own ending. Maybe he sinks and dies. Maybe Natasha comes back to life and gets it on with her sister. Maybe Ludacris strokes his chin thoughtfully for half and hour. Whatever it is, it's better than what actually happens.

What actually happens is Max Payne starts tripping balls. Seriously. Not even exaggerating. He trips balls, sees these crazy ass angel things who don't do shit except hover menacingly, and throughout all that, somehow manages to kill the bad guy. I don't know about you, but if I was tripping that hard, I don't think I'd have the proper aim needed to fire a deadly shot into the bad guy. I think I'd probably inform everyone that I had become a rooster illusion and jump out of the fucking window. This is supposed to be the moment in which Max Payne confronts his demons and exacts his revenge on the man who killed his family, but instead it turns into Max Payne getting high as shit and somehow accidentally saving the day. If this was Pineapple Express, I would've been happy. But it's not. It had the makings of an excellent, albeit campy, murder noir action movie. And then the end was a complete mess. Mona Sax started off Russian and badass, and turned out to be completely useless. Jim Bravura played an excellent character with enemies on both sides of the fence who could have ultimately teamed up with Max Payne, but instead he fell into dust. And Max Payne's potentially awesome vengeance kick left me wondering what the writers were on when they wrote the third act and how I could get my hands on it.

In short? Give this movie a watch. Just kill it as soon as Max Payne hits the icy water. Drowning death/incestuous lesbian zombies/anything else you can come up with is so much better.
Posted by M. Hufstader at 11:10 AM