My Ass May Be Dumb, But I Ain't No Dumbass.

It's the last day of the month, which can only mean one thing: time for me to sneak in my Tarantino review! This month, we've got none other than the dear Jackie Brown (1997). To be honest, Jackie Brown is not exactly my favorite Tarantino. Don't get me wrong: I still love it to death. It's like broken Oreo in the box--it's still got all the right ingredients, it's just not as satisfying as the rest. It's also probably the Tarantino that I've seen the least. With that said, I think Jackie Brown is highly underrated by many--especially me. Rewatching it this time around gave me a level of appreciation for the film's subtleties that I'd brushed off the last time around while I was waiting for a gun to go off.


The Plot: Jackie Brown is a rarity among Tarantino movies for one simple reason: it's not original material. Rather, it's based off of Rum Punch by Elmore Leonard. In a way, it shows. While it still certainly feels like a Tarantino movie, Jackie Brown is a little more "tame" than most Tarantinos go. There's not a lot of excessive swearing, shooting, or shamelessness. Rather, it's Tarantino's tribute to blaxploitation films, all while showing off the lovely Pam Grier.

The Music: Like all Tarantino films, the music is spot on. Some of it is background music, but most of the music is used as part of the scene--something Jackie Brown puts on her record player or something Ordell cranks up on his car radio. It adds a little something to the film and puts the audience right in the middle of it, rather than keeping us as a voyeuristic distance. Also, fun fact: they play (a fucking epic) Strawberry Letter 23 by the Brothers Johnson, which also appears on the Pulp Fiction soundtrack. Go figure.

The Characters: I know the movie is called Jackie Brown, but in my mind, this is the Ordell Robbie story. If you watch this movie for anything, you have to watch it for Samuel L. Jackson. This is, hands down, my favorite performance he's ever given. Granted, Jules Winnfield from Pulp Fiction is probably my favorite character Samuel L. Jackson has under his belt, but if you want a solid display of Jackson's acting skills, turn to Ordell. Ordell is a mean motherfuckin' gangster. Hard like panther. He's not Samuel L. Jackson's typical anti-hero or Jedi. He's a genuinely manipulative, evil son of a bitch. But he's also a character with a lot of subtly to him. He's paranoid, he's got a big ego, and he's got a soft spot for his "surfer girl." Oh, and did I mention the hair? Scrap everything I just said. See it for the hair.

Then, of course, there's my girl Jackie Brown. One of the most badass Tarantino women of all time. What's so great about Jackie Brown? Well, for starters, she's about the least likely badass around. She's a 40-something fight attendant working for a shitty airport. Despite her humble appearances, she's got the brain of an expert thief and works the system to her advantage. She knows how to smuggle, how to steal, but more importantly, how to get exactly what she wants. The funny thing is, she's not even that great of a manipulator. She manipulates by telling the truth. If she wants something, she'll tell you upfront exactly what she wants. She doesn't beat around the bush. But she's so confident and methodical, it's really hard to say no.

Of course, the interesting thing about Jackie Brown is that she is a really human character. She has her weaknesses. She gets emotional, she doesn't like being yelled at, and she has a soft spot for clothes shopping. But she's her own woman, and that is, in the end, what makes her stand out from the rest. She falls in love, but she doesn't give herself over to it. At the end of the day, she's still Jackie Brown: the one woman act.

Speaking of love interest, Max Cherry, played by Robert Forster, is not actually my all-time favorite character. I understand he's supposed to be the hardboiled detective-style nice guy, and maybe that's the problem. Tarantino is talented at writing clever, can't-help-but-love-'em badasses who carry guns and wreck havoc. Max Cherry doesn't even drink or smoke. He just has too much of a halo for Quentin Tarantino's pen. Or maybe it's just Robert Forster I'm not a big fan of. Either way, his character has a bad habit of draining the energy from the screen, which is something this dude cannot abide. The only time he gets really interesting is when he mentions holding a stun gun, but by that time we're already more than halfway into the movie and he's already racked up too many yawns.

And then we've got our lovable side-characters. Robert De Niro, possibly one of the last people I'd expect in a Tarantino film, is hilarious as the frumpy ex-convict. But his best bits are, without a doubt, his scenes with Bridget Fonda. She's gorgeous and has great feet, which is really all you want from a Tarantino-girl. She plays the snide, pothead surfer-girl, Melanie, and possibly one of my favorite characters in the film if only for her snark and her attitude. Together, they're brilliant and add a good deal of energy to the movie.

Other than that, we've got Michael Keaton playing Ray Nicolette, the sneaky tool of an ATF agent. He's slick, and more than that, a lot slicker than he thinks he is. His partner is the slightly more down-to-earth Mark Dargus (Michael Bowen), with an excellent mustache to his name. Chis Tucker plays his typical high-energy fuck up. And be on the look out for Simone. That's all I can say about her. 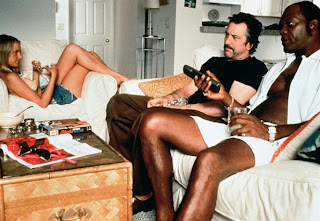 The Conversation: The phone debate. Without a doubt. It's the first full-scene of the film (minus the Jackie Brown credit sequence) and yet has got to be my favorite. Ordell goes off on his love of guns ("AK-47. The very best there is. When you absolutely, positively got to kill every motherfucker in the room, accept no substitutes."), Melanie shows off her legs, and Louis (De Niro) looks stuck somewhere in between the two. And then the phone goes off, and Ordell and Melanie get caught in a game of chicken, fighting over who has to answer the phone. If ever a man could explode someone's head with his eyes, it would be Samuel L. Jackson.

The Iconic Moment: Ordell spends about five minutes convincing Beaumont to get inside the trunk of his car so Beaumont can help him with the element of surprise during a trade-off. After a good couple guilt-trips, threats, and finally an appeal to Beaumont's stomach, the other man climbs in the trunk of Ordell's car. Ordell pumps up the music, smiles, and drives around the block into an abandoned lot, where he opens the trunk and unloads his gun in Beaumont. Genius. Pure genius. Everything about that scene drips with brilliant screenwriting. And this is why Tarantino is iconic.

And that's all for Jackie Brown! Brilliant, underrated Tarantino film. If you haven't seen it, fix that. Immediately. Up next in the QT Blogathon is...drum roll...Kill Bill Vol. 1! It's one of my favorites, one of the Tarantinos I've seen the most, and has the gorgeous Uma Thurman. I'm stoked. If you have any Jackie Brown posts, hit me up at mhufstader (at) gm.slc.edu sometime around today or tomorrow and I'll put them up. So far, I've got no one in the Jackie Brown camp, so I might just have a post solely for you! Otherwise, email me between now and the end of August with something about Kill Bill Vol. 1 and I'll add it to my jar of eyeballs collection.
Posted by M. Hufstader at 11:06 AM