Now I know what you're all thinking. "What, that movie where James Bond gets really old?" Quit your bellyaching. He's older, sure. But he's still charming. Calling Sean Connery "old" is like called George Clooney or Cary Grant "old". Men like that don't sag--they just get better with age. Like wine and novelty t-shirts. Eh. Like wine.
Diamonds Are Forever starts off strong. Blofeld's "death" is epic. It's funny, it's the first five minutes of the movie, but it's an excellent fucking five minutes. First, we get Bond, from the neck down, beating the shit out of everyone with his brilliant Connery-accent (you can't even really call it Scottish, honestly). And finally, Blofeld's entrance as the last monkey in the evolution chain, smoking his pipe (WHERE'S YOUR NECK, BLOFELD?). Excellent. Top it off with a death-by-slime and an ugly Blofeld demise, and I'm hooked. The movie could've stopped there, honestly, and I would've been happy. But the show goes on... 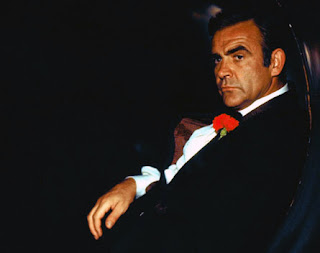 Characters: Felix Leighter makes one of the more charming appearances he's made in the Bond franchise. He's another old fat guy, but you know what? He's got kind eyes, and there's something just plain endearing about him. I can't see him saving the country any time soon, but I would hire him as Sheriff of Fargo any day of the week. Even if he does spend about half the movie pissed off at Bond for chasing tail. But who really listens to anything Leighter says anyway? Or Q., for that matter. Poor Q. can't even get a flighty Bond girl to sit down and listen to him yammer on about this gadget and that gadget. Don't worry, Desmond Llewelyn, we still love you.

As for one more little honorable mention, Mr. Whyte is great. Played by none other than Jimmy Dean himself, he's obnoxious, doesn't take no for an answer, and has a ridiculous as hell accent. You go, sausage man!
Bond girls: Tiffany Case is great. Played by Jill St. John, she's strong from start to finish. Smoldering, quick, and above all, devious. You can never completely tell which team she's playing for (which, really, is my kind of girl). James Bond plays her more than once himself, because there's no better way to a woman's heart than a little deception. The point is, she has character. She knows what she wants out of life, and takes very purposeful steps to better herself. She isn't doing this to save a family member in peril, or out of some sense of duty for her country and fellow man--she's, simply put, out to save her own skin. But at no point in the movie does she come off desperate, instead, she's demanding, determined, and petty to the point of getting into arguments with small children ("blow up your pants"? Really, Tiffany?). But Bond slaps some good sense into her, which is always great. Good to know the best way to handle a strong woman is with a strong hand. Bond Logic, #24.

Plenty O'Toole (Lana Wood--is that her real name or still Bond name?) is Plenty of everything. She's gorgeous as hell, and she's an unashamed moneygrabber. Why am I sensing a theme with the women in the movie? Nonetheless, she's a funny case of Bond girl since she doesn't have sex with Bond, and she doesn't die. What's up with that? Then again, the sex was almost there, and the pool was just good luck, so technically she dabbled in a little bit of both.
Bambi and Thumper. Are the best. Hands down. These chicks are fucking psycho, but amazing. There is nothing I don't love about them.

Villains: Mr. Wint and Mr. Kid. Goodness. It'd been a while since I've seen such great henchmen. They're not your standard, run of the mill, muscle men henchmen. These are ugly nerds who've only just crawled out of their basements to hunt down enough money to squeeze in another month of World of Warcraft. Mr. Wint looks like a lovechild between Malcolm McDowell and an ironing board, and Mr. Kid is his balding walrus lover companion. How could this go wrong?? Nonetheless, these two teach a valuable lesson for all people working in the evil business of evil: when two people who you did not expect to be there hand you a package and then slowly inch away from you, the chances that you're about to blow in in five seconds just skyrocketed.


Last but not least, Blofeld. My favorite villain. There is nothing better than Blofeld. Except maybe two Blofelds. Or a Southern-accent Blofeld. Or Blofeld In drag. CAN THIS GET ANY BETTER? Is there anything more to say about this man? No, I think not.
Most badass moment: This one is actually a tough call, because there are so many good ones. I'm going to have to go with two. 1) The many faces of Blofeld--or should I say, the many pussies. 2) Bambi and Thumper. And everything they did.

Most ridiculous moment: The fact that James Bond's only identification is his Playboy Club card. And by "ridiculous" here I mean "fucking awesome."

Mission report: All in all, every sequence really delivers. Bond's coffin moment is terrifying. You know those moments in every Bond film in which you know he's going to escape, somehow, you just haven't quite figured it out? It was one of those moments. Then we've got the racist ape women scene, which is unapologetic. And Bond's car chase...in a moon buggy? And Bond's car chase part two, where he outruns a bunch of coppers by literally driving his beautiful, beautiful car sideways. And the scene in which James nearly gets crushed on top of an elevator! So it's all a little disconnected, and I lost track of the plot after about twenty minutes. Usually, you can at least hold onto the general strain of logic, but this one was all over the place, tangled up in a ball of flaming explosive twine. But it's all so fucking exciting, you don't really give a damn. It's like a pile of mini-Bond movies in one mess of explosions, tits, and speeding vehicles. Thank fuck for no shark attack.
The ending is all sorts of ridiculous. Bond has way too much fun yanking Blofeld around on the crane, Tiffany Case can't shoot a gun without falling off of something, and Bond is attacked with shish kabobs of death. But its a fittingly disjointed (yet fun) end to a disjointed (yet fun) movie. No one can say Sean Connery didn't go out with an confetti covered bang.
Quotes:
Bond: "I think you have something you need to get off your chest."
Bond: "Do you want anything from Holland?"
Moneypenny: "A diamond. In a ring."
Bond: "Would you settle for a tulip?"
Bond: "That's quite a nice little nothing you're almost wearing. I approve!"

Tiffany Case: "I'm cooperating, Mr. Leighter...I really am."
Bond: "I can vogue for that."

Bond: "Your problems are all behind you now."
Posted by M. Hufstader at 9:50 PM