I May Be A Bastard, But I'm Not A Fucking Bastard.

QT BLOGATHON: FROM DUSK TILL DAWN 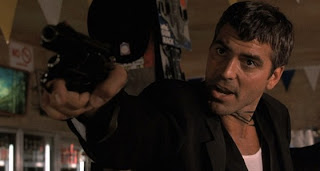 ...is a quote that pretty accurate describes my tucked-tail return to the blogosphere. I know what you're thinking: IT'S ALIIIIVE! It turns out as soon as you start making money, the important things in life go down the crapper. Like paying tribute to one of the greatest directors of our time--the one and only, Quentin Tarantino. Thanks to recently leaving the world of unemployment, I've been a terrible lesbian mother to this blog. And, of course, there's the QT Blogathon to think about. This month was dedicated to one of my favorite late-nights-with-lots-of-friends-and-lots-of-popcorn movies, From Dusk Till Dawn (1996). Since I've already written up a review of From Dusk Till Dawn, I was going to tackle Four Rooms (1995) this month instead. I failed. But I still plan on getting on Four Rooms in the future. In the meanwhile, here's some love to From Dusk Till Dawn:

1. Mr. Darko of The Movie Log waxes poetic about the campiness that is From Dusk Till Dawn. And includes a badass poster.

Definitely check out my man Mr. Darko. In other news, this month is Jackie Brown (1997). I haven't seen this one in quite a while, so I'm stoked. Especially for Samuel L. Jackson's hair. Shit's about to get REAL. If you have any Jackie Brown posts/videos/luggage bags, send them my way at mhufstader (at) gm.slc.edu (note the email change, I'm finally switching out from earthlink).
Posted by M. Hufstader at 6:16 PM